Contributions to the IACAPAP 2018 Congress about Prenatal Thyroid Theory

Last week IACAPAP 2018 (23rd World Congress of the International Association for Child and Adolescent Psychiatry and Allied Professions) congress was held in Prague. Two contributions relating to Prenatal Thyroid Theory of Homosexuality found place in the programme all authored by Dr. Osman Sabuncuoglu. The first one was about a new group of youngsters explained by the prenatal thyroid theory. The audience followed the presentation with great interest and several questions were raised at the end. The second one was a poster presentation about the emerging roles for child and adolescent psychiatrist as a result of prenatal thyroid theory. Both of Sabuncuoglu's works can be accessed at the links below: https://www.researchgate.net/publication/326723698_A_second_group_of_youngsters_with_gender_nonconformitysame-sex_attraction_born_to_mothers_with_thyroid_dysfunction_in_pregnancy https://www.researchgate.net/publication/326723857_Prenatal_thyroid_theory_of_gender_nonconformitysame-sex_attraction_the_emerging_roles_for_child_and_adolescent_psychiatry
Gönderen Osman Sabuncuoğlu zaman: 03:58 Hiç yorum yok:

In the January 2018 Issue of Archives of Sexual Behavior, a commentary on the article of Skorska et al. (2017) has been published by Dr. Sabuncuoglu. Skorska et al. (2017) had viewed low birth in gay males and higher evidence of miscarriage in their mothers as an indication of a second type of maternal immune hypothesis. For Dr. Sabuncuoglu all the findings were an indication of prenatal thyroid theory, as higher risk for low birth weight and miscarriage in the mothers were all associated with maternal thyroid dysfunction. There is also a unique contribution in the paper. An in-depth explanation of fraternal birth order effect from prenatal thyroid theory perspective, as well as fetal microchmerism suggested in its etiopathogenesis. "...in my opinion, a comprehensive consideration of all thyroid issues is essential in the study of gender nonconformity and same-sex attraction." says Dr. Osman Sabuncuoglu The article is available at: https://link.springer.com/article/10.1007/s10508-017-1122-2 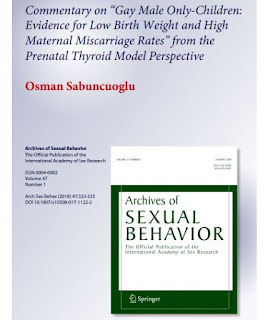 The authors (Alan Sanders et al., 2017) of a genome-wide association study have reported that male homosexual orientation is associated with two regions located on chromosomes 13 and 14. On chromosome 14, the thyroid stimulating hormone receptor (TSHR) gene was found to span the most significant region that confirms past findings relating familial atypical thyroid function and male homosexuality. In Graves's disease, TSHR codes for the major autoantigen in the autoimmune hyperthyroidism. The paper cites Sabuncuoglu's work as follows: "...…Furthermore, a recent retrospective chart review of 790 adolescents (8 to 17 years) previously admitted to a child psychiatry service found 15 mothers with a history of thyroid dysfunction during pregnancy, 16 adolescents with a history of same-sex attraction and/or gender nonconformity, and 12 overlapping mother-offspring pairs with both (p < 0.0001), suggestive of a possible relationship…" Headlined in several internet and mass media, the findings of the study was a great surprise for those who are still unaware of Prenatal Thyroid Theory. Even in an unlikely design to confirm the Prenatal Thyroid Theory, the positive findings are in no way surprising as Sabuncuoglu had noted in his 2015 paper that: "...…The genetic model is also under scrutiny. It is not surprising to find significant results for homosexuality in genetic studies as prevalent thyroid disorders (i.e., Hashimoto thyroiditis) have a very strong genetic background. In the search for possible factors for the persistence of homosexuality in human populations, thyroid disorders provide a reasonable explanation as they are prevalent and more common in women." We do not think that Graves's disease is the main path to contribute to male homosexuality. First of all, even Graves's disease is much more common in females. Yet we can eagerly claim that a genetic study on female homosexuals will reveal stronger positive results for Hashimoto's thyroiditis. As we note here :) 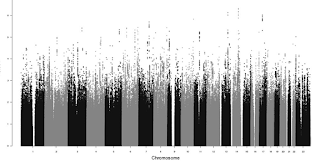 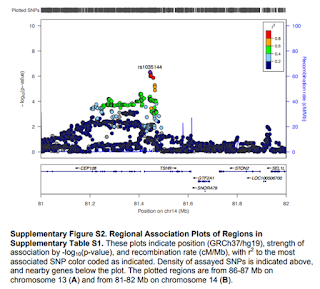 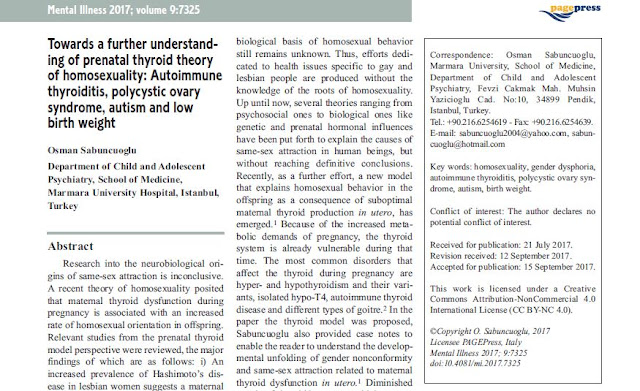 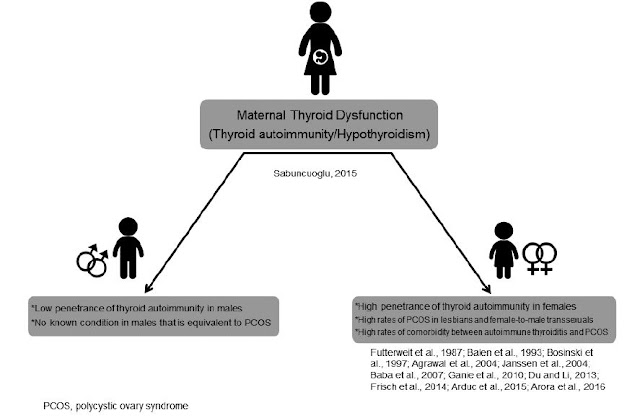 Probably the most authoritative book on the subject of interplay between what the title says, "Hormones, Brain and Behavior" has cited the thyroid-homosexuality proposal article in the latest edition published this month.

Edited by Pfaff DW & Joels M and published by the Academic Press, the key features of the book include;


The citation refers to the 2015 study as: "...but the sample was relatively small and the percentage of homosexuality in the sample population was 2%, lower than in the general population (Sabuncuoglu, 2015)." However, that reasoning falls quite short, as a clinical sample of children and adolescents is unlikely to be similar to general population of mostly adult people. For instance, the ADHD percentage in a child psychiatry clinical population may be up to 40%, whereas it is expected to be about 5% in general child  population, and 2-3% in general adult population. While some neurodevelopmental disorders fade with age, some of them increase when minors grow up. 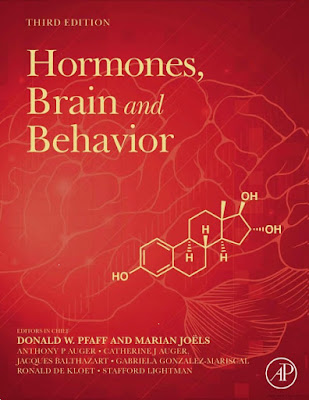 An Editorial regarding the thyroid-homosexuality proposal article

An Editorial entitled "A Link Between Maternal Thyroid Hormone and Sexual Orientation?" has been published in the journal Mental Illness regarding the thyroid-homosexuality proposal article.

The author Jeffrey Mullen, from the University of California, Irvine, briefly summerizes the article and concludes: "...Whether or not maternal thyroid dysfunction causes homosexuality, this study presents data that strongly suggest that there is an association between the two. Though past research has not been able to attribute a single factor to the development of sexual orientation, future research may find additional contributing factors. Ultimately, this study has made a very compelling point concerning the very nature of gender nonconformity and sexual orientation. Those findings will likely prove to be important to our understanding of the topic, and will serve as a point of reference from which future research will be directed."

Please refer to the following links for full text access:

The article of thyroid-homosexuality link has been indexed in PubMed

PubMed is the most widely used search portal for biomedical research.

In addition, the free, full-text article of prenatal thyroid model is also available at PubMed Central (PMC), which is the U.S. National Institutes of Health (NIH) digital archive of biomedical and life sciences journal literature. 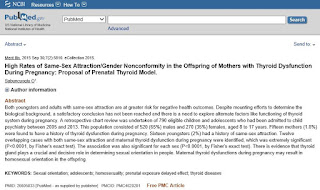